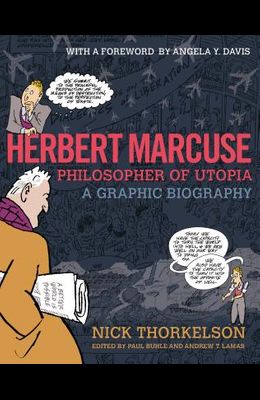 by
Nick Thorkelson and Paul Buhle and Andrew Lamas

Nick Thorkelson's exploration of the ideas and personality of Herbert Marcuse is exactly the sort of comic book I have longed to read. It is engaging, artful, and explores the world of revolutionary ideas. Books like this keep the fire going inside.-- Joe Sacco I believe that Marcuse's ideas can be as valuable today as they were fifty years ago.-- Angela Y. Davis , from the foreword A warm, funny, richly detailed biography. Thorkelson has found a powerful graphic style and narrative voice that animate Marcuse's life and his theory of rebellion. As both personal saga and primer on radical political philosophy, it could not be more relevant to today's resistance movement.-- Dan Wasserman , The Boston Globe political cartoonist Thorkelson's graphic life of Herbert Marcuse is a riotous romp through 20th-century philosophy. The story of a man who exists at the eye of storm of ideas, of movements and of social strategies. With workers and students on the streets of Paris once more, Marcuse's life and work has never been more relevant.-- Kate Evans , author of Red Rosa: A Graphic Biography Herbert Marcuse (1898-1979) was a little-known German scholar when he became one of the 20 th century's most unlikely pop stars: a celebrity philosopher. In the 1960s, his argument for a principled utopianism catalyzed the ideals of a rebellious generation, and Marcuse became an intellectual guide for activists and revolutionaries around the world. The legacy of his contribution to a radical shift of consciousness has resonated in social-change movements ever since. This comics-format biography brings Marcuse's life, work, and times to a new generation. From his youth in Weimar Germany and early studies with Martin Heidegger, to his emigration from Nazi Germany along with colleagues of the Frankfurt School, to his rise as one of its major theorists along with Theodor Adorno and Walter Benjamin, to his status as a countercultural icon, readers are introduced to the theories and circumstances that made Marcuse into one of the world's most influential intellectuals. Mentor to a young Angela Davis and often referred to as the unofficial faculty advisor to the New Left, Marcuse's controversial critique of the comfortable unfreedoms of post-WWII capitalism entered popular consciousness with the 1964 publication of One-Dimensional Man , which sold over 100,000 copies in its first years in print. His argument for the possibility of a more humane and sustainable world was grounded in a personal knowledge of the violence of authoritarianism, and the risk of its resurgence. Perennially relevant, radical, and inspiring, Marcuse's concept of the Great Refusal --the protest against that which is--is a guide for our times. More praise for Herbert Marcuse, Philosopher of Utopia In the age of Trump, an updated version of fascism is back, memory has become a burden, and the notion of a comprehensive politics in the age of single issues appears obsolete, if not quaint. All the more reason to read Herbert Marcuse, Philosopher of Utopia . Marcuse not only connected the dots among various problems, theories, and intellectual fields, he infused them with a sense of passion, rigorousness and hope. Marcuse was a philosopher who pushed ideas into the social realm, was fearless in his critique of capitalism, and joyous in his belief that collective struggles in the service of a radical democracy were a necessity rather than an option. His ideas are arguably more relevant than they were fifty years ago because the threats to humankind are more dangerous today. Marcuse's energizing sense of critique, hope, politics, and Utopian vision are more necessary than ever, especially for the emerging generations of young activists.-- Henry A. Giroux , author of American Nightmare: Facing the Challenge of Fascism