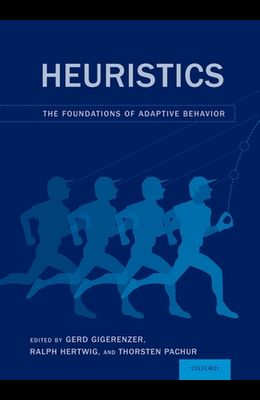 Heuristics: The Foundations of Adaptive Behavior

by
Gerd Gigerenzer and Ralph Hertwig and Thorsten Pachur

How do people make decisions when time is limited, information unreliable, and the future uncertain? Based on the work of Nobel laureate Herbert Simon and with the help of colleagues around the world, the Adaptive Behavior and Cognition (ABC) Group at the Max Planck Institute for Human Development in Berlin has developed a research program on simple heuristics, also known as fast and frugal heuristics. In the social sciences, heuristics have been believed to be generally inferior to complex methods for inference, or even irrational. Although this may be true in small worlds where everything is known for certain, we show that in the actual world in which we live, full of uncertainties and surprises, heuristics are indispensable and often more accurate than complex methods. Contrary to a deeply entrenched belief, complex problems do not necessitate complex computations. Less can be more. Simple heuristics exploit the information structure of the environment, and thus embody ecological rather than logical rationality. Simon (1999) applauded this new program as a revolution in cognitive science, striking a great blow for sanity in the approach to human rationality. By providing a fresh look at how the mind works as well as the nature of rationality, the simple heuristics program has stimulated a large body of research, led to fascinating applications in diverse fields from law to medicine to business to sports, and instigated controversial debates in psychology, philosophy, and economics. In a single volume, the present reader compiles key articles that have been published in journals across many disciplines. These articles present theory, real-world applications, and a sample of the large number of existing experimental studies that provide evidence for people's adaptive use of heuristics.