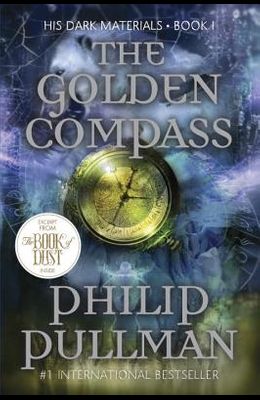 Book #1 in the His Dark Materials Series
by
Philip Pullman
$3.88
Select Format

The first title in the Dark Materials trilogy, now newly repackaged. Content to run wild among the scholars of Jordan College with her daemon familiar Pantalaimon by her side, Lyra Belaqua is jarred by the arrival of her fearsome uncle. Soon, she's drawn into a struggle born of Gobblers and stolen children, witch clans, and armored bears, never suspecting the shocking truth.

From the front Cover In a landmark epic of fantasy and storytelling, Philip Pullman invites readers into a world as convincing and thoroughly realized as Narnia, Earthsea, or Redwall. Here lives an orphaned ward named Lyra Belacqua, whose carefree life among the scholars at Oxford's Jordan College is shattered by the arrival of two powerful visitors. First, her fearsome uncle, Lord Asriel, appears with evidence of mystery and danger in the far North, including photographs of a mysterious celestial phenomenon called Dust and the dim outline of a city suspended in the Aurora Borealis that he suspects is part of an alternate universe. He leaves Lyra in the care of Mrs. Coulter, an enigmatic scholar and explorer who offers to give Lyra the attention her uncle has long refused her. In this multilayered narrative, however, nothing is as it seems. Lyra sets out for the top of the world in search of her kidnapped playmate, Roger, bearing a rare truth-telling instrument, the compass of the title. All around her children are disappearing--victims of so-called Gobblers--and being used as subjects in terrible experiments that separate humans from their daemons, creatures that reflect each person's inner being. And somehow, both Lord Asriel and Mrs. Coulter are involved. From the Hardcover edition.

His Dark Materials Series In Order - By Philip Pullman

Books like His Dark Materials: The Golden Compass (Book 1)

List of All Editions of His Dark Materials: The Golden Compass (Book 1)