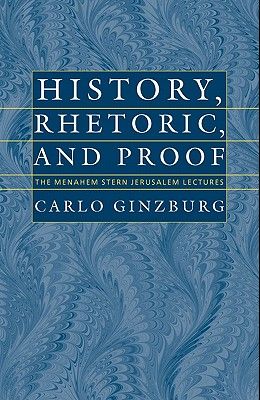 Historian Carlo Ginzburg uses the occasion of his Menachem Stern Lectureship to present a provocative and characteristically brilliant examination of the relation between rhetoric and historiography. In four lectures, based on a wide range of texts -- Aristotle's Poetics; humanist Lorenzo Valla's tract exposing the Donation of Constantine as a forgery; an early 18th-century Jesuit historical account purporting to record the diatribe of a Mariana Island native against Spanish rule; and Proust's commentary on Flaubert's style -- he demonstrates that rhetoric, if properly understood, is related not only to ornament but to historical understanding and truth. Ginzburg discovers a middle ground between the empiricist or positivist view of history, and the current postmodern tendency to regard any historical account as just one among an infinity of possible narratives, distinguished or measured not by the standard of truth, but by rhetorical skill. As a whole, these lectures stake out a position that both mediates and transcends warring factions in the current historiographical debate.