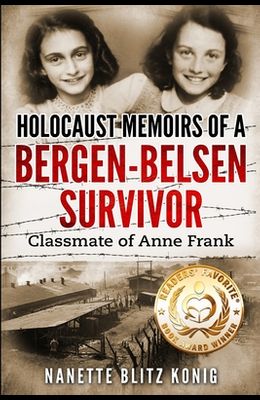 Holocaust Memoirs of a Bergen-Belsen Survivor & Classmate of Anne Frank

A monument to the indestructible nature of the human spirit. In these compelling, award-winning, Holocaust memoirs, Nanette Blitz Konig relates her amazing story of survival during the Second World War when she, together with her family and millions of other Jews were imprisoned by the Nazi's with a minimum chance of survival. Nanette (b. 1929), was a class mate of Anne Frank in the Jewish Lyceum of Amsterdam. They met again in the Bergen-Belsen concentration camp shortly before Anne died. During these emotional encounters, Anne Frank revealed how the Frank family hid in the annex, their subsequent deportation, her experience in Auschwitz and her plans for her diary after the war. This honest WW2 story describes the hourly battle for survival under the brutal conditions in the camp imposed by the Nazi regime. It continues with her struggle to recover from the effects of starvation and tuberculosis after the war, and how she was gradually able to restart her life, marry and build a family. Nanette Blitz Konig, mother of three, grandmother of six and great grand mother of four, lives in S o Paulo, Brazil. Her Holocaust memoirs were written to speak in the name of those millions who were silenced forever.