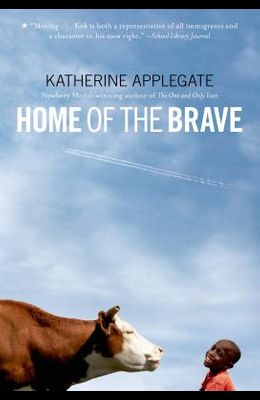 Home of the Brave

by
Katherine A Applegate

The author of the bestselling Animorphs series (written under the name K.A. Applegate) delivers her first stand-alone literary novel: a beautifully wrought story about an African immigrant to America, who makes a journey from hardship to hope.

From the Back Cover When the flying boatreturns to Earth at last, I open my eyesand gaze out the round window.What is all the white? I whisper.Where is all the world?
From the front Cover Kek comes from Africa. In America, he sees the snow for the first time, and feels its sting. He's never walked on ice, and he falls. He wonders if the people in this new place will be like the winter--cold and unkind. In Africa, Kek lived with his mother, father, and brother. But only he and his mother have survived, and now she's missing. Kek is on his own. Slowly, he makes friends: a girl who is in foster care, and old woman who owns a rundown farm, and a cow whose name means family in his native language. As Kek awaits word of his mother's fate, he weathers the tough Minnesota winter by finding warmth in his few friendships, strength in his memories, and belief in his new country. Bestselling author Katherine Applegate presents a beautifully wrought novel about an immigrant's journey from hardship to hope. Katherine Applegate is the author of several bestselling series, including Animorphs, as well as The Buffalo Storm, a picture book. Home of the Brave is Katherine Applegate's first stand-alone novel. In Kek's story, I hope readers will see the neighbor child with a strange accent, the new kid in class from some faraway land, the child in odd clothes who doesn't belong, she says. I hope they see themselves. Ms. Applegate lives with her family in North Carolina.