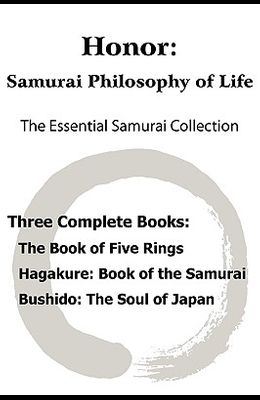 Honor: Samurai Philosophy of Life - The Essential Samurai Collection; The Book of Five Rings, Hagakure: The Way of the Samura

by
Miyamoto Musashi and Yamamoto Tsunetomo and Inazo Nitobe

Honor: Samurai Philosophy of Life - The Essential Samurai Collection is comprised of three of the most influential books on the Samurai philosophy of honor and life. The Book of Five Rings by Miyamoto Musashi is a text on kenjutsu and the martial arts in general, written by the samurai warrior Miyamoto Musashi circa 1645. It is considered a classic treatise on military strategy, much like Sun Tzu's The Art of War and Chanakya's Arthashastra. There have been various translations made over the years, and it enjoys an audience considerably broader than only that of martial artists: for instance, some business leaders find its discussion of conflict and taking the advantage to be relevant to their work. The modern-day Hy&#333;h&#333; Niten Ichi-ry&#363; employs it as a manual of technique and philosophy. Hagakure: The Way of the Samurai is a practical and spiritual guide for a warrior, drawn from a collection of commentaries by the samurai Yamamoto Tsunetomo, former retainer to Nabeshima Mitsushige, the third ruler of what is now the Saga prefecture in Japan. Tsuramoto Tashiro compiled these commentaries from his conversations with Tsunetomo from 1709 to 1716; however, it was not published until many years after. Hagakure is also known as the The Book of the Samurai, Analects of Nabeshima or the Hagakure Analects. Bushido: The Soul of Japan by Inazo Nitobe is, along with the classic text Hagakure by Tsunetomo Yamamoto, a study of the way of the samurai. A best-seller in its day, it was read by many influential foreigners, among them President Theodore Roosevelt, President John F. Kennedy and Robert Baden-Powell. It may well have shaped Baden-Powell's ideas on the Boy Scout movement he founded.