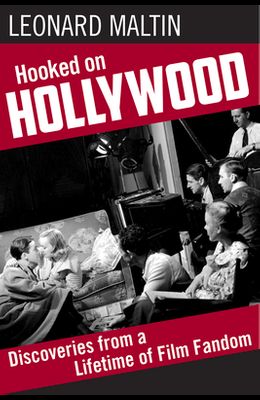 Hooked on Hollywood: Discoveries from a Lifetime of Film Fandom

Leonard Maltin is America's best-known film historian, film reviewer, and author of books that have sold more than 7 million copies. He remains a thought leader on past and present Hollywood through his website www.leonardmaltin.com, and a social media presence that includes an active Facebook page and a Twitter feed with more than 66,000 followers. In Hooked on Hollywood , Maltin opens up his personal archive to take readers on a fascinating journey through film history. He first interviewed greats of Hollywood as a precocious teenager in 1960s New York City. He used what he learned from these luminaries to embark on a 50-year (and counting) career that has included New York Times bestselling books, 30 years of regular appearances coast-to-coast on Entertainment Tonight, movie introductions on Turner Classic Movies, and countless other television and radio performances. Early Maltin interviews had literally been stored in his garage for more than 40 years until GoodKnight Books brought them to light for the first time in this volume to entertain readers and inform future film scholars. Teenaged Leonard Maltin landed one-on-ones with Warner Bros. sexy pre-Code siren Joan Blondell; Emmy-winning and Oscar-nominated actor Burgess Meredith; Cecil B. DeMille's right-hand-man Henry Wilcoxon; Oscar-winning actor Ralph Bellamy; playwright, novelist, and MGM screenwriter Anita Loos; early screen heartthrob George O'Brien; classic Paramount director Mitchell Leisen; and others. Later in his career, Maltin sat down with men and women who worked inside the top studios during the heyday of movies and early television. This second set of in-depth interviews reveals what life was like under Louis B. Mayer, Jack Warner, Harry Cohn, and the other titans of Hollywood. What emerges is a fascinating and at times uproarious homage to Golden Era Hollywood. In addition, key feature articles from Maltin's newsletter Movie Crazy are published here for the first time, providing new perspectives on the Warner Bros. classics Casablanca and Gold Diggers of 1933 as well as many other masterpieces--and bombs--from Hollywood history. Finally, Maltin looks back at what he considers Hollywood's overlooked studio, RKO Radio Pictures, which gave us such classics as King Kong and the many dance musicals of Astaire and Rogers. In Leonard's unique and witty style, he looks at dozens of obscure RKO features from the 1930s, including saucy pre-Codes, musicals, comedies, and mysteries. Leonard Maltin's love of movies and vast knowledge about their history shines through from the first page to the last in this unique volume, which includes 150 rare photos and a comprehensive index.