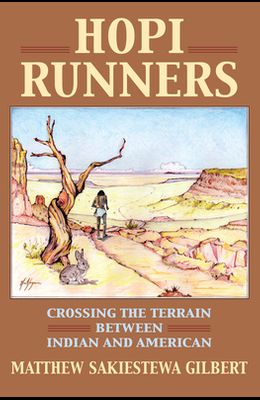 Hopi Runners: Crossing the Terrain Between Indian and American

In the summer of 1912 Hopi runner Louis Tewanima won silver in the 10,000-meter race at the Stockholm Olympics. In that same year Tewanima and another champion Hopi runner, Philip Zeyouma, were soundly defeated by two Hopi elders in a race hosted by members of the tribe. Long before Hopis won trophy cups or received acclaim in American newspapers, Hopi clan runners competed against each other on and below their mesas--and when they won footraces, they received rain. Hopi Runners provides a window into this venerable tradition at a time of great consequence for Hopi culture. The book places Hopi long-distance runners within the larger context of American sport and identity from the early 1880s to the 1930s, a time when Hopis competed simultaneously for their tribal communities, Indian schools, city athletic clubs, the nation, and themselves. Author Matthew Sakiestewa Gilbert brings a Hopi perspective to this history. His book calls attention to Hopi philosophies of running that connected the runners to their villages; at the same time it explores the internal and external forces that strengthened and strained these cultural ties when Hopis competed in US marathons. Between 1908 and 1936 Hopi marathon runners such as Tewanima, Zeyouma, Franklin Suhu, and Harry Chaca navigated among tribal dynamics, school loyalties, and a country that closely associated sport with US nationalism. The cultural identity of these runners, Sakiestewa Gilbert contends, challenged white American perceptions of modernity, and did so in a way that had national and international dimensions. This broad perspective linked Hopi runners to athletes from around the world--including runners from Japan, Ireland, and Mexico--and thus, Hopi Runners suggests, caused non-Natives to reevaluate their understandings of sport, nationhood, and the cultures of American Indian people.