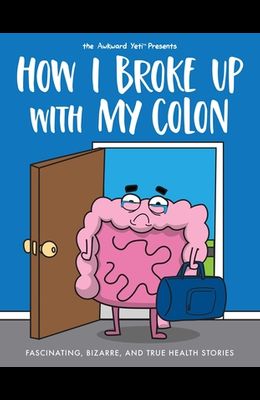 How I Broke Up with My Colon: Fascinating, Bizarre, and True Health Stories

by
Nick Seluk and The Awkward Ye Yeti

Fascinating, bizarre, and educational true-life medical stories retold in cartoon form by the creator of the mega-popular webcomic, The Awkward Yeti . Medical Tales Retold takes real stories from fans (both patients and medical professionals) and turns them into funny, ridiculous, and educational long-form comics. Previously released on Tapas , it was one of the top long-form series on the platform and well received by fans and peers. An episode titled The Battle discussed depression and anxiety and went viral, making it the most iconic comic from the series. Stories are expanded on using caricatures of people (sometimes resembling the storyteller, sometimes not) and organs from the Awkward Yeti / Heart and Brain universe to make them easy to understand and more entertaining.