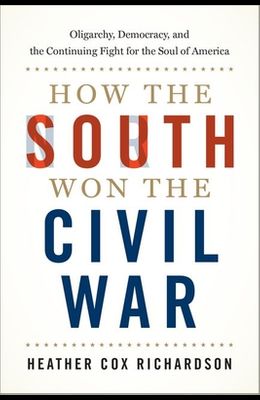 How the South Won the Civil War: Oligarchy, Democracy, and the Continuing Fight for the Soul of America

In this provocative new work, Heather Cox Richardson argues that while the North won the Civil War, ending slavery, oligarchy, and giving the country a new birth of freedom, the victory was short-lived. Settlers from the East pushed into the West, where the seizure of Mexican lands at the end of the Mexican-American War and treatment of Native Americans cemented racial hierarchies. The Old South found a new home in the West. Both depended on extractive industries--cotton in the former and mining, cattle, and oil in the latter--giving rise to a white ruling elite, one that thrived despite the abolition of slavery, the assurances provided by the 13th, 14th, and 15th Amendments, and the economic opportunities afforded by Western expansion. How the South Won the Civil War traces the story of the American paradox, the competing claims of equality and white domination that were woven into the nation's fabric from the beginning. Who was the archetypal new American? At the nation's founding it was Eastern yeoman farmer, independent and freedom-loving, who had galvanized and symbolized the Revolution. After the Civil War the mantle was taken up by the cowboy, singlehandedly defending his land and his women against savages, and protecting his country from its own government. As new states entered the Union in the late nineteenth century, western and southern leaders found common ground. Resources, including massive amounts of federal money, and migrants continued to stream into the West during the New Deal and World War II. Movement Conservatives--starting with Barry Goldwater--claimed to embody cowboy individualism, working with Dixiecrats to renew the ideology of the Confederacy. The Southern strategy worked. The essence of the Old South never died and the fight for equality endures.