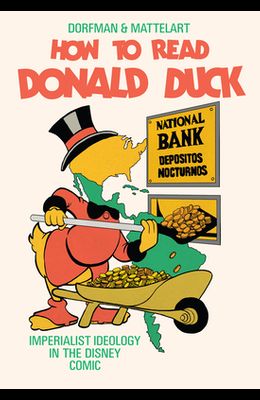 How to Read Donald Duck: Imperialist Ideology in the Disney Comic

by
Ariel Dorfman and Armand Mattelart

This bitterly ironic study of the imperialist messaging of Disney cartoons is a classic of cultural studies, with new relevance to our ever-more-globalized popular culture. Daisy: If you teach me how to skate this afternoon I'll give you what you have always wanted. Donald: Do you mean...? Daisy: Yes... my 1872 coin. First published in 1971 in Chile, where the entire third edition was dumped into the ocean by the Chilean navy and bonfires were held to destroy earlier editions, How to Read Donald Duck reveals the imperialist, capitalist ideology at work in our most beloved cartoons. Focusing on the hapless mice and ducks of Disney - curiously parentless, marginalized, always short of cash - Ariel Dorfman and Armand Mattelart dissect the narratives of dependency and social aspiration that define the Disney corpus. Disney recognized the challenge, and when the book was translated and imported into the U.S. in 1975, all 4,000 copies were impounded by U.S. Customs. Ultimately, 1,500 copies of the book were allowed into the country, the rest of the shipment was blocked, and until now no American publisher has re-released the book, which has sold over a million copies worldwide. (The original English-language edition is now a collector's item, selling for up to $500 on Amazon.) A devastating indictment of a media giant, a document of twentieth-century political upheaval, and a reminder of the dark potentiality of pop culture, How to Read Donald Duck published in seventeen languages--is now once again available, together with a new introduction by Ariel Dorfman.