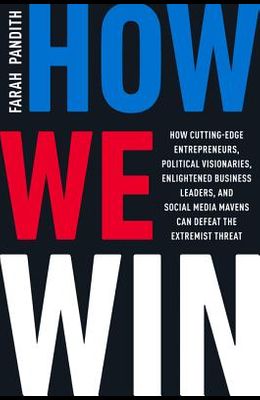 Farah Pandith, one of the world's most respected experts on countering violent extremism and the first-ever United States special representative to Muslim Communities, reveals how we can stop the rapid spread of extremist ideology. Mass shootings in the name of foreign armies; cars running down innocent pedestrians; suicide bombs destroying schools--only a miniscule sample of the savage terrorist attacks of last year. After so much effort, so much money, so much proclaimed expertise, it is clear that extremism is not diminishing but spiraling out of control. Unable to stem recruitment, we seem doomed to a worsening struggle with a constantly evolving enemy that remains several steps ahead of us. Meanwhile, current policies seem as if they were carefully calibrated not to reduce extremist violence, but to encourage it. But while most policymakers don't realize it, we actually possess the means right now to inoculate communities against extremist ideologies. In How We Win , Farah Pandith shows us how we can do just that. Based on visits to eighty countries, thousands of discussions, interviews, and focus groups she's held around the world, as well as her own high-level experience on the National Security Council, at the State Department and on the Homeland Security Advisory Council, Pandith exposes the surprising root causes and dynamic by which Muslim millennials are pulled toward extremism. She also reveals exactly how that dynamic can be profoundly disrupted, incapacitating the abilities of radicals to turn millennials and Gen Z toward violence--a strategy that requires dispensing with outdated twentieth-century policy approaches, drawing instead on a new kind of power, Open Power, which mobilizes the expertise and resources of diplomats, corporate leaders, mental health experts, sociologists, entrepreneurs, and most of all, Muslim youth themselves.

From the Back Cover There is a war being fought, and we are losing it. Despite the billions of dollars spent since 9/11 trying to defeat terrorist organizations, the so-called Islamic State, Al Qaeda, and other groups remain a terrifying geopolitical threat. In some ways the threat has grown worse: The 9/11 hijackers came from far away; the danger today can come from anywhere--from the other side of the world to across the street. Unable to stem recruitment, we seem doomed to a worsening struggle with a constantly evolving enemy that remains several steps ahead of us. Unfortunately, current policies seem almost guaranteed not to reduce extremist violence but instead to make it easier for terrorists to spread their hateful ideas, recruit new members, and carry out attacks. We actually possess the means right now to inoculate communities against extremist ideologies. In How We Win , Farah Pandith presents a revolutionary new analysis of global extremism as well as powerful but seldom-used strategies for vanquishing it. Drawing on her visits to eighty countries, the hundreds of interviews and focus groups she's conducted around the world, and her high-level experience in the Bush and Obama administrations, Pandith argues for a paradigm shift in our approach to combat extremism, one that mobilizes the expertise and resources of diplomats, corporate leaders, mental health experts, social scientists, entrepreneurs, local communities, and, most of all, global youth themselves. There is a war being fought, and we can win it. This is how.