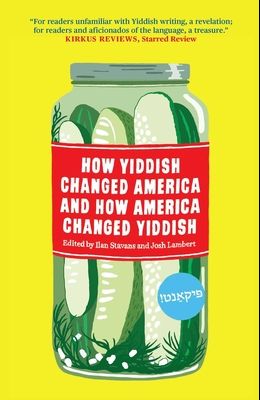 How Yiddish Changed America and How America Changed Yiddish

by
and Ilan Stavans and Josh Lambert
$29.99
Select Format

Is it possible to conceive of the American diet without bagels? Or Star Trek without Mr. Spock? Are the creatures in Maurice Sendak's Where the Wild Things Are based on Holocaust survivors? And how has Yiddish, a language without a country, influenced Hollywood? These and other questions are explored in this stunning and rich anthology of the interplay of Yiddish and American culture, edited by award-winning authors and scholars Ilan Stavans and Josh Lambert. It starts with the arrival of Ashkenazi immigrants to New York City's Lower East Side and follows Yiddish as it moves into Hollywood, Broadway, literature, politics, and resistance. We take deep dives into cuisine, language, popular culture, and even Yiddish in the other Americas, including Canada, Argentina, Cuba, Mexico, and Colombia. The book presents a bountiful menu of genres: essays, memoir, song, letters, poems, recipes, cartoons, conversations, and much more. Authors include Nobel Prize-winner Isaac Bashevis Singer and luminaries such as Grace Paley, Cynthia Ozick, Chaim Grade, Michael Chabon, Abraham Cahan, Sophie Tucker, Blume Lempel, Irving Howe, Art Spiegelman, Alfred Kazin, Harvey Pekar, Ben Katchor, Paula Vogel, and Liana Finck. Readers will laugh and cry as they delve into personal stories of assimilation and learn about people from a diverse variety of backgrounds, Jewish and not, who have made the language their own. The Yiddish saying states: Der mentsh trakht un got lakht . Man plans and God laughs. How Yiddish Changed America and How America Changed Yiddish illustrates how those plans are full of zest, dignity, and tremendous humanity.