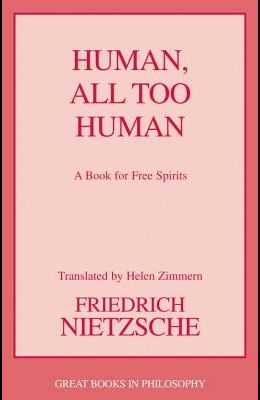 Human, All Too Human

Human, All Too Human (1878) is often considered the start of Friedrich Nietzsche's mature period. A complex work that explores many themes to which Nietzsche later returned, it marks a significant departure from his previous thinking. Here Nietzsche breaks with his early allegiance to Schopenhauer and Wagner, and establishes the overall framework of his later philosophy. In contrast to his previous disdain for science, now Nietzsche views science as key to undercutting traditional metaphysics. This he sees as a crucial step in the emergence of free spirits who will be the avant-garde of culture. In summing up the crucial change of perspective expressed in Human, All Too Human, Nietzsche used the following words in his later work Ecce Homo: Human, All Too Human is a memorial of a crisis.... W]ith this book I liberated myself from that in my nature which did not belong to me. Idealism does not belong to me...realities were altogether lacking in my knowledge, and the 'idealities' were worth damn all A downright burning thirst seized hold of me: thenceforward I pursued in fact nothing other than physiology, medicine, and natural science. This is an essential work for anyone who wishes to understand Nietzsche's incisive critique of Western culture and values.