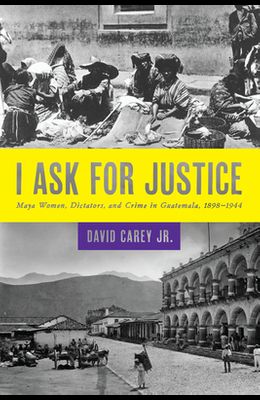 Winner, Bryce Wood Book Award, Latin American Studies Association, 2015 Given Guatemala's record of human rights abuses, its legal system has often been portrayed as illegitimate and anemic. I Ask for Justice challenges that perception by demonstrating that even though the legal system was not always just, rural Guatemalans considered it a legitimate arbiter of their grievances and an important tool for advancing their agendas. As both a mirror and an instrument of the state, the judicial system simultaneously illuminates the limits of state rule and the state's ability to co-opt Guatemalans by hearing their voices in court. Against the backdrop of two of Latin America's most oppressive regimes--the dictatorships of Manuel Estrada Cabrera (1898-1920) and General Jorge Ubico (1931-1944)--David Carey Jr. explores the ways in which indigenous people, women, and the poor used Guatemala's legal system to manipulate the boundaries between legality and criminality. Using court records that are surprisingly rich in Maya women's voices, he analyzes how bootleggers, cross-dressers, and other litigants crafted their narratives to defend their human rights. Revealing how nuances of power, gender, ethnicity, class, and morality were constructed and contested, this history of crime and criminality demonstrates how Maya men and women attempted to improve their socioeconomic positions and to press for their rights with strategies that ranged from the pursuit of illicit activities to the deployment of the legal system.

Books similiar to I Ask for Justice: Maya Women, Dictators, and Crime in Guatemala, 1898-1944

List of All Editions of I Ask for Justice: Maya Women, Dictators, and Crime in Guatemala, 1898-1944