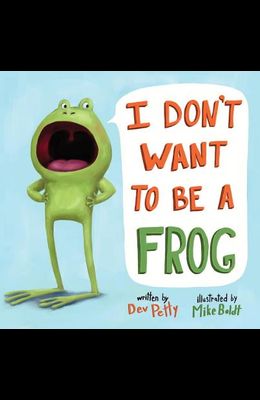 I Don't Want to Be a Frog

Part of the I Don't Want to Be a Frog Series
by
Dev Petty and Mike Boldt
$16.99
Select Format

The hit book about a willful young frog with a serious identity crisis and his heard-it-all-before father. Perfect for fans of Mo Willems's Don't Let the Pigeon Drive the Bus and Jon Klassen's I Want My Hat Back Frog wants to be anything but a slimy, wet frog. A cat, perhaps. Or a rabbit. An owl? But when a hungry wolf arrives--a wolf who HATES eating frogs--our hero decides that being himself isn't so bad after all. In this very silly story with a sly message, told in hilarious dialogue between a feisty young frog and his heard-it-all-before father, young readers will identify with little Frog's desire to be something different, while laughing along at his stubborn yet endearing schemes to prove himself right. And look for the hilarious sequels-- I Don't Want to Be Big , There's Nothing to Do , and I Don't Want to Go to Sleep. &#9733; First-time author Petty's dialogue between a frog father and his son makes its point about accepting one's nature with a big grin. . . . The story might create similar gratitude in the minds of readers--or it might just make them giggle.-- Publishers Weekly , STARRED REVIEW A lively look at self-acceptance.-- Kirkus Reviews This amusing story ends with a laugh and a much more content frog.-- School Library Journal Silliness and deadpan humor combine into a hopping good story of being happy with who you are.-- Booklist A paean to self-acceptance wrapped in snappy dialogue and illustrated with richly colored comic paintings.-- Wall Street Journal Petty and Boldt provide just enough predictability to hook youngest readers, then deliver a delightful twist or two to create surprise and satisfaction--for both the green hero and the many fans he'll make with this book.-- Shelf Awareness This lighthearted exploration of identity will delight as a readaloud.-- The Bulletin of the Center for Children's Books

Books like I Don't Want to Be a Frog