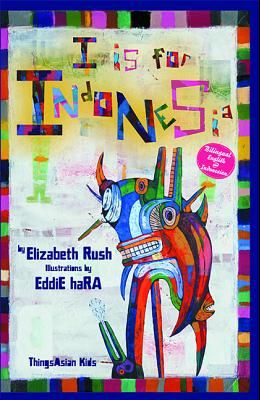 I Is for Indonesia

Not even purple polka-dot pajamas are enough to keep Bruno the bat from boredom--but a magical journey to Indonesia with Agus the octopus does the trick. From Krakatoa's volcanic heights to the top of Borobudur, a 1300-year-old temple, from blue-feathered cassowaries to Buta Kala monsters, from the sweetness of gamelan music to the cacophony of Jakarta's traffic jams, Bruno regains his sense of wonder. And when he returns home to Florida, he still carries that with him, making familiar surroundings as exotic as Indonesia. (This may be the only children's picture book that ends with a quote from T.S. Eliot--soon to be quoted on playgrounds across the country--plus it's bilingual.)

From the Back Cover Characters from the magical menagerie of contemporary Indonesian artist, EddiE haRA, populate this story of adventure and discovery that begins when Bruno the bat is bored. After school Bruno walks down to the sea where he serendipitously stumbles upon an intrepid squid named Agus. Together they embark on an odyssey to Indonesia In I is for Indonesia Bruno and Agus explore ancient temples, chat with mythic monsters, steer clear of exploding volcanoes, and ponder the meaning of life. Readers, both young and old, will enjoy this technicolor trip into the wonder and mystery of Indonesia.

Books similiar to I Is for Indonesia

List of All Editions of I Is for Indonesia