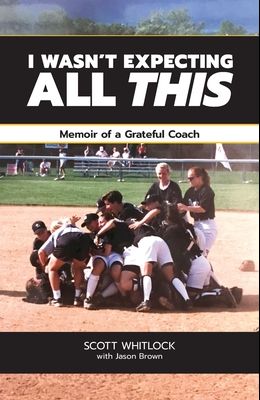 I Wasn't Expecting All This: Memoir of a Grateful Coach

Memorable Moments from a Grateful Coach Having coached collegiately for nearly three decades (and lived for nearly six), Scott Whitlock has developed a unique and interesting perspective on life - along with some very entertaining stories. Whitlock has seen it all, not only on the field, but behind the scenes. Some of his favorite memories are documented in his memoir, I Wasn't Expecting All This . Whitlock's career began in 1985, when Kennesaw State University hired him as assistant women's basketball coach and assistant slowpitch softball coach. In 1986, he took over as head softball coach and was instrumental in building one of the most respected college softball programs in the country. Whitlock was the driving force behind the program's successful transition from slowpitch at the NAIA level to fastpitch at the NAIA, from NAIA to NCAA Division II, and from Division II to Division I. One of the collegiate softball's all-time, winningest softball coaches, Whitlock shares his whimsical stories of building a successful program, the dynamics of coaching for nearly 30 years, and the interesting characters and life lessons he encountered along the way. Topics include: Building an NCAA softball program Transitioning from slowpitch to fastpitch; from NAIA to NCAA Division I Managing no expectations to unrealistic expectations Life before and after winning national championships How youth sports have radically changed in America Becoming friends with the greatest softball coach of all time Working with two USA Olympic Softball Teams Handling a job offer from a prominent dream school The heartbreak of losing a best friend Experience a wide array of emotions from an affable man's journey from being a part-time assistant coach to becoming one of the most respected coaches in NCAA softball culminating with a hall of fame induction.

List of All Editions of I Wasn't Expecting All This: Memoir of a Grateful Coach