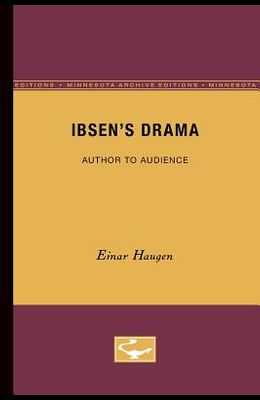 Ibsen's Drama was first published in 1979. Minnesota Archive Editions uses digital technology to make long-unavailable books once again accessible, and are published unaltered from the original University of Minnesota Press editions. A dramatist for all seasons Einar Haugen calls Henrik Ibsen in this series of lectures given in honor of the 150th anniversary of the Norwegian playwright's birth. Using a modified version of the communications model developed by linguist Roman Jakobson, Haugen provides a readable, succinct analysis of Ibsen's thinking and dramaturgy. He examines the ways in which Ibsen the author communicated with his nineteenth-century audience and is able, still, to move and inform playgoers today. Haugen brings to this work a lifetime of familiarity with Ibsen in Norwegian and in translation, and he draws upon his own experience as a theatergoer and as an observer of student and audience reaction to the plays. Ibsen's Drama will bring pleasure and a deeper understanding of the playwright to students and playgoers alike. Einar Haugen is Victor S. Thomas Professor of Scandinavian and Linguistics, emeritus, at Harvard University. He is author, editor, or translator of many books and articles in linguistics, literature, and immigrant history, notably The Norwegian Language in America (1953), The Scandinavian Languages (1976), and Land of the Free (1978).

From the Back Cover Minnesota Archive Editions uses digital technology to make long-unavailable books once again accessible to scholars, students, researchers, and general readers. Rich with historical and cultural value, these works are published unaltered from the original University of Minnesota Press editions. The books offered through Minnesota Archive Editions are produced in limited quantities according to customer demand and are available through select distribution partners.