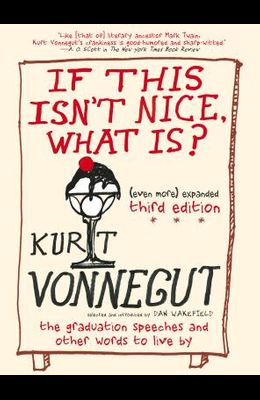 If This Isn't Nice, What Is? (Even More) Expanded Third Edition: The Graduation Speeches and Other Words to Live by

For this first-ever paperback edition of If This Isn't Nice, What Is? , the beloved collection of Kurt Vonnegut's campus speeches, editor Dan Wakefield has unearthed three early gems as a sort of prequel--the anti-war Moratorium Day speech he gave in Barnstable, Massachusetts, in October 1969, a 1970 speech to Bennington College recommending skylarking, and a 1974 speech to Hobart and William Smith Colleges about the importance of extended families in an age of loneliness. Vonnegut himself never graduated college, so his words of admonition, advice, and hilarity always carried the delight, gentle irony, and generosity of someone savoring the promise of his fellow citizens--especially the young--rather than his own achievements. Selected and introduced by fellow novelist and friend Dan Wakefield, the speeches in If This Isn't Nice, What Is? comprise the first and only book of Vonnegut's speeches. There are fourteen speeches, eleven given at colleges, one to the Indiana Civil Liberties Union, one on the occasion of Vonnegut receiving the Carl Sandburg Award, and now the anti-war speech he gave just months after the publication of Slaughterhouse-Five , as well as from related short personal essays--eighteen chapters in all. In each of these, Vonnegut takes pains to find the few things worth saying and a conversational voice to say them in that isn't heavy-handed or pretentious or glib, but funny, joyful, and serious too, even if sometimes without seeming so.

Books similiar to If This Isn't Nice, What Is? (Even More) Expanded Third Edition: The Graduation Speeches and Other Words to Live by

List of All Editions of If This Isn't Nice, What Is? (Even More) Expanded Third Edition: The Graduation Speeches and Other Words to Live by