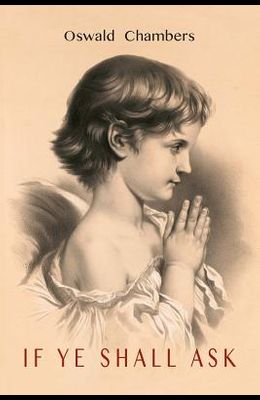 If You Will Ask [If Ye Shall Ask]

2016 Reprint of 1938 Edition. Full facsimile of the original edition, not reproduced with Optical Recognition Software. Originally published as If Ye Shall Ask, this small book on prayer comprises lectures Chambers gave at the Bible Training College in London where he focused on all aspects of prayer, from prayer's simplicity to intercessory prayer for others. He believed that prayer changes the one praying as much as prayer moves the hand of God. The foreword introduces readers to a simple man of keen insight who, regardless of who he was with or what they were doing, without warning would say, 'Off with your hats, it is good to pray everywhere, ' followed by a brief prayer. Chambers was a spiritual realist who believed prayer enabled God to perform His order through those who pray, even though he didn't consider prayer a natural function of the worldly minded. However, he knew prayer was a way of getting to know God that would develop the life of God in those who prayed. This powerful book on prayer, filled with wisdom and keen perception, is one to savor slowly and return to time and time again. Written by a devout man of God who shows us what we are missing when we don't have 'the life of God in us.' There aren't enough stars to value its worth, whether five, ten, fifty or a hundred. Cited from review by Gail Welborn, Seattle Christian Book Review Examiner.