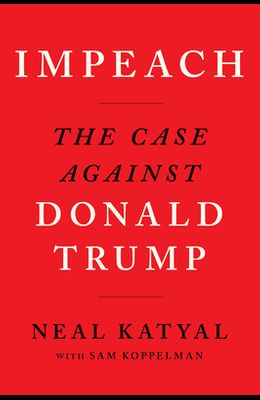 Impeach: The Case Against Donald Trump

INSTANT NEW YORK TIMES BESTSELLER Why impeachment is the only remedy for the dangers posed by President Trump, as explained by celebrated Supreme Court lawyer and former Acting Solicitor General Neal Katyal. No one is above the law. This belief is as American as freedom of speech and turkey on Thanksgiving--held sacred by Democrats and Republicans alike. But as celebrated Supreme Court lawyer and former Acting Solicitor General Neal Katyal argues in Impeach , if President Trump is not held accountable for his gross abuses of power, it could very well mark the end of our democracy. A primer on the history and process of impeachment and an explanation of the extraordinary circumstances for which it must be reserved, Impeach explains why it is the only solution for a bad actor like President Trump, and argues that we must use it to bar him from office--before it's too late.

Books similiar to Impeach: The Case Against Donald Trump

List of All Editions of Impeach: The Case Against Donald Trump