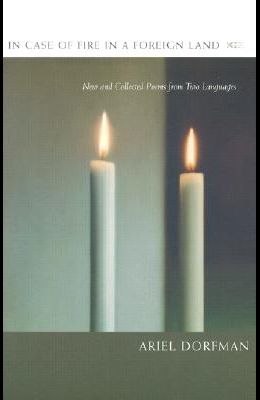 In Case of Fire in a Foreign Land: New and Collected Poems from Two Languages - Spanish Language Edition

by
Ariel Dorfman and Edith Grossman

In the world of Chilean poet Ariel Dorfman, men and women can be forced to choose between leaving their country or dying for it. The living risk losing everything, but what they hold onto--love, faith, hope, truth--might change the world. It is this subversive possibility that speaks through these poems. A succession of voices--exiles, activists, separated lovers, the families of those victimized by political violence--gives an account of ruptured safety. They bear witness to the resilience of the human spirit in the face of personal and social damage in the aftermath of terror. The first bilingual edition of Dorfman's work, In Case of Fire in a Foreign Land includes ten new poems and a new preface, and brings back into print the classic poems of the celebrated Last Waltz in Santiago . Always an eloquent voice against the ravages of inhumanity, Dorfman's poems, like his acclaimed novels, continue to be a searing testimony of hope in the midst of despair.

From the Back Cover As long as poems such as these are written and published, the Pinochets of the world cannot have the last say.--Breyten Breytenbach