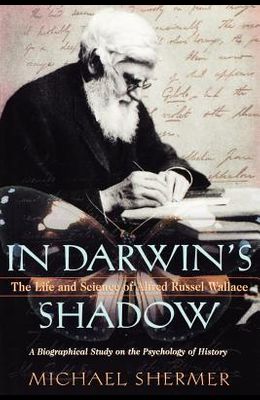 In Darwin's Shadow: The Life and Science of Alfred Russel Wallace: A Biographical Study on the Psychology of History

Virtually unknown today, Alfred Russel Wallace was the co-discoverer of natural selection with Charles Darwin and an eminent scientist who stood out among his Victorian peers as a man of formidable mind and equally outsized personality. Now Michael Shermer rescues Wallace from the shadow of Darwin in this landmark biography. Here we see Wallace as perhaps the greatest naturalist of his age--spending years in remote jungles, collecting astounding quantities of specimens, writing thoughtfully and with bemused detachment at his reception in places where no white man had ever gone. Here, too, is his supple and forceful intelligence at work, grappling with such arcane problems as the bright coloration of caterpillars, or shaping his 1858 paper on natural selection that prompted Darwin to publish (with Wallace) the first paper outlining the theory of evolution. Shermer also shows that Wallace's self-trained intellect, while powerful, also embraced surprisingly naive ideas, such as his deep interest in the study of spiritual manifestations and seances. Shermer shows that the same iconoclastic outlook that led him to overturn scientific orthodoxy as he worked in relative isolation also led him to embrace irrational beliefs, and thus tarnish his reputation. As author of Why People Believe Weird Things and founding publisher of Skeptic magazine, Shermer is an authority on why people embrace the irrational. Now he turns his keen judgment and incisive analysis to Wallace's life and his contradictory beliefs, restoring a leading figure in the rise of modern science to his rightful place.