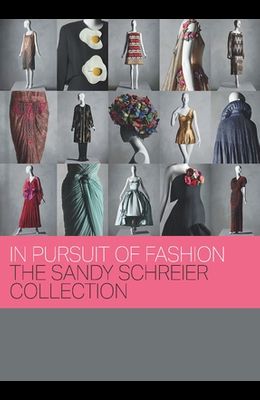 In Pursuit of Fashion: The Sandy Schreier Collection

by
Andrew Bolton and Jessica Regan and Melissa Huber

Presenting outstanding costumes and insightful texts about one of the greatest private collections of 20th-century fashion This handsome volume explores the modern discipline of fashion collecting, presenting remarkable works from one of the greatest private collection of 20th-century costume. This group of clothing and accessories, assembled over several decades by Sandy Schreier, includes many rare and historically significant pieces that define key moments in fashion. Her collection features not only iconic garments by established designers but also looks by pioneering couturiers rarely represented in museum collections. Outstanding works, by designers that include Gilbert Adrian, Crist bal Balenciaga, Bou Soeurs, Gabrielle Chanel, Christian Dior, Mariano Fortuny, Karl Lagerfeld, Paul Poiret, and Valentina, are illustrated with new photography by fashion photographer Nicholas Cope. An informative introduction traces the progress of her collecting from its roots in Detroit to the present day. The book also includes descriptions of over 80 works, including garments, accessories, and rare designer drawings, in addition to a lively interview with Schreier by Andrew Bolton that reveals her collecting philosophy.