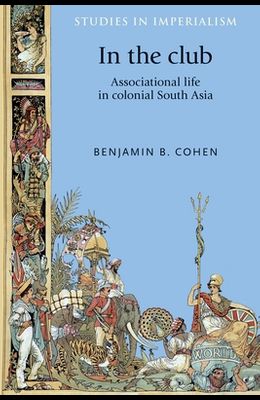 In the Club: Associational Life in Colonial South Asia

In the club presents a comprehensive examination of social clubs across South Asia. Often a target of intellectual scorn or literary ridicule, In the club reorients attention towards the complex - and until now, often hidden inner workings of club life while at the same time arguing for clubs as key contributors to South Asia's colonial associational life and civil society. Using government records, personal memoirs, private club records, and club histories themselves, In the club thematically explores colonial club life. All clubs had legal underpinnings that enmeshed them in larger colonial legal networks. Clubs maintained physical locations that demanded a wide variety of accommodations in their local Indian environs. No club could avoid veering near or off financial cliffs as their profits and losses swung wildly, sometimes out of control. Indians and Britons worked shoulder to shoulder in clubs often utilizing a vast employment network to better themselves and move up the club hierarchy. Clubs are (in)famous for their racial overtones and policies but In the club challenges this assertion for what has been more hype than reality. By the early twentieth century, Indian and British women benefited from their own clubs, while 'the club, ' far from being a colonial relic has continued to thrive in postcolonial South Asia. Woven together, these chapters shed light on a variety of networks (social, ideological, and logistical) that penetrated every club while at the same time locating clubs in a growing associational world that reached from India to Britain and beyond. In the club is critical reading for scholars of South Asia, graduate students, and intellectually engaged club members alike.