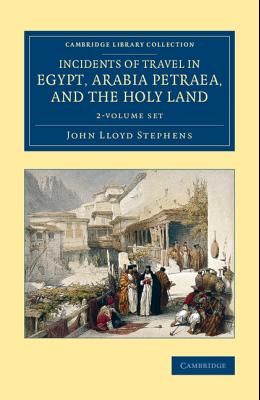 Incidents of Travel in Egypt, Arabia Petraea, and the Holy Land - 2 Volume Set

The American writer and diplomat John Lloyd Stephens (1805 52) was effectively the founder of Mesoamerican archaeology, through his rediscovery of the Mayan civilization (his two-volume Incidents of Travel in Central America, Chiapas, and Yucatan is also reissued in this series). But before that, having qualified and practised as a lawyer in New York, he went on a two-year journey through Egypt and the Near East, publishing an account of his experiences in 1837 (under the name of George Stephens): this reissue is of the expanded 1838 edition. The work was extremely popular, possibly because, as he states in the preface, Stephens writes 'without perplexing himself with any deep speculations upon the rise and fall of empires', nor does he give much archaeological detail. He intends to show the bustling New World what scenes are 'now passing in the faded and worn-out kingdoms of the Old World', involving travel in areas previously unknown to Western explorers.