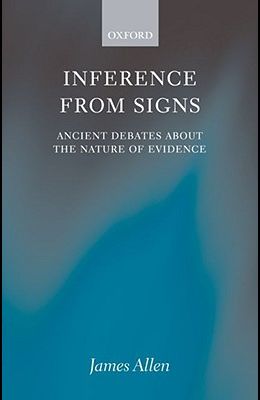 Inference from Signs: Ancient Debates about the Nature of Evidence

James Allen presents an original and penetrating investigation of the notion of inference from signs, which played a central role in ancient philosophical and scientific method. Inference from Signs examines an important chapter in ancient epistemology: the debates about the nature of evidence and of the inferences based on it--or signs and sign-inferences as they were called in antiquity. Special attention is paid to three main issues. Firstly, the relation between sign-inference and explanation. At a minimum, sign-inferences permit us to draw a new conclusion, and they are used in this way in every sphere of life. But inferences must do more than this if they are to play the parts assigned to them by natural philosophers and medical theorists, who appeal to signs to support the theories they put forward to explain the phenomena in their domains. Allen examines the efforts made by Aristotle, the Stoics, the Epicureans, and in medicine to discover what further conditions must be satisfied by inferences if they are to advance explanatory purposes. To speak of inference from signs presupposes that the use of signs is a form of reasoning from grounds to a conclusion. However, an alternative nonrational conception is explored, according to which the use of signs depends instead on acquired dispositions to be reminded by one thing or another. This view is traced to its probable origin in the Empirical school of medicine, whence it was taken by Pyrrhonian skeptics, who introduced it into philosophy. Evidence sometimes supports conclusive arguments, but at other times it only makes a conclusion probable. Allen investigates Aristotle's path-breaking attempt to erect standards by which to evaluate non-conclusive but--in Aristotelian terms--reputable inferences. Inference from Signs fills an important gap in the histories of science and philosophy and provides the first comprehensive treatment of this topic.