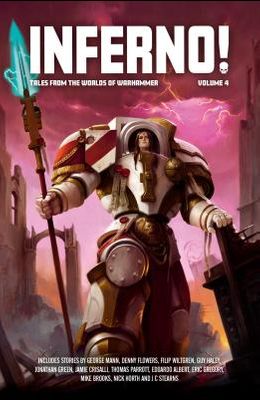 by
Guy Haley and George Mann and Denny Flowers

Inferno Volume 4 showcases some of the best new fiction from across Games Workshop's many universes; from the grim darkness of the 41st Millennium, to the brutal underhive of Necromunda, through to the sprawling realms of the Age of Sigmar and the ancient lands of the Warhammer Chronicles. The fouth volume of this new anthology series brings you new short fiction from the worlds of Warhammer. Penned by debut and current Black Library authors, its tales range from the back streets of the world-that was to a shrouded inn in the Mortal Realms, while in the brutal galaxy of the Dark Imperium, the Ultramarines and others deliver the Emperor's fury to their many foes, and in the depths of Necromunda's underhive, gangers clash in brutal combat.