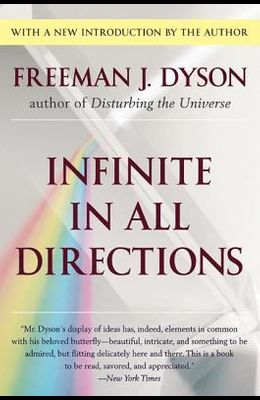 Infinite in All Directions: Gifford Lectures Given at Aberdeen, Scotland April-November 1985

Infinite in All Directions is a popularized science at its best. In Dyson's view, science and religion are two windows through which we can look out at the world around us. The book is a revised version of a series of the Gifford Lectures under the title In Praise of Diversity given at Aberdeen, Scotland. They allowed Dyson the license to express everything in the universe, which he divided into two parts in polished prose: focusing on the diversity of the natural world as the first, and the diversity of human reactions as the second half. Chapter 1 is a brief explanation of Dyson's attitudes toward religion and science. Chapter 2 is a one-hour tour of the universe that emphasizes the diversity of viewpoints from which the universe can be encountered as well as the diversity of objects which it contains. Chapter 3 is concerned with the history of science and describes two contrasting styles in science: one welcoming diversity and the other deploring it. He uses the cities of Manchester and Athens as symbols of these two ways of approaching science. Chapter 4, concerned with the origin of life, describes the ideas of six illustrious scientists who have struggled to understand the nature of life from various points of view. Chapter 5 continues the discussion of the nature and evolution of life. The question of why life characteristically tends toward extremes of diversity remains central in all attempts to understand life's place in the universe. Chapter 6 is an exercise in eschatology, trying to define possible futures for life and for the universe, from here to infinity. In this chapter, Dyson crosses the border between science and science fiction and he frames his speculations in a slightly theological context.