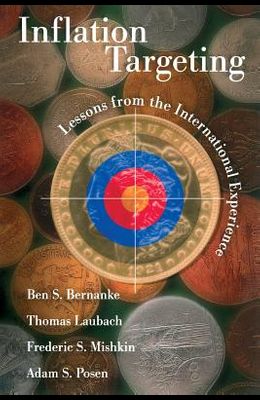 by
Ben Bernanke and Thomas Laubach and Frederic S Mishkin

How should governments and central banks use monetary policy to create a healthy economy? Traditionally, policymakers have used such strategies as controlling the growth of the money supply or pegging the exchange rate to a stable currency. In recent years a promising new approach has emerged: publicly announcing and pursuing specific targets for the rate of inflation. This book is the first in-depth study of inflation targeting. Combining penetrating theoretical analysis with detailed empirical studies of countries where inflation targeting has been adopted, the authors show that the strategy has clear advantages over traditional policies. They argue that the U.S. Federal Reserve and the European Central Bank should adopt this strategy, and they make specific proposals for doing so. The book begins by explaining the unique features and advantages of inflation targeting. The authors argue that the simplicity and openness of inflation targeting make it far easier for the public to understand the intent and effects of monetary policy. This strategy also increases policymakers' accountability for inflation performance and can accommodate flexible, even discretionary, monetary policy actions without sacrificing central banks' credibility. The authors examine how well variants of this approach have worked in nine countries: Germany and Switzerland (which employ a money-focused form of inflation targeting), New Zealand, Canada, the United Kingdom, Sweden, Israel, Spain, and Australia. They show that these countries have typically seen lower inflation, lower inflation expectations, and lower nominal interest rates, and have found that one-time shocks to the price level have less of a pass-through effect on inflation. These effects, in turn, are improving the climate for economic growth. The authors warn, however, that the success of inflation targeting depends on operational details, such as how the targets are defined and when they are announced. They also show that inflation targeting is not a panacea that can make inflation perfectly predictable or reduce it without economic costs. Clear, balanced, and authoritative, Inflation Targeting is a groundbreaking study that will have a major impact on the debate over the right monetary strategy for the coming decades. As a unique comparative study of what central banks actually do in different countries around the world, this book will also be invaluable to anyone interested in how economic policy is made.

From the Back Cover The most accessible study of this important new monetary regime--accessible to a wide range of readers well beyond the ranks of professional economists. [ Inflation Targeting ] should, and is intended to, appeal to historians, political scientists, international-relations students, politicians, central bankers, journalists, as well as to economists and to undergraduates at any level of sophistication. --C.A.E. Goodhart, London School of Economics and external member of the United Kingdom's Monetary Policy Committee