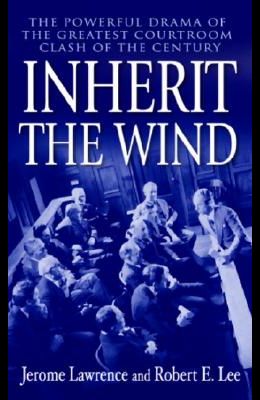 Inherit the Wind: The Powerful Drama of the Greatest Courtroom Clash of the Century

The powerful classic drama based on the Scopes monkey trial of the 1920s--one of the most important legal confrontations of the 20th century--is repackaged in this new paperback edition.

From the front Cover The accused was a slight, frightened man who had deliberately broken the law. His trial was a Roman circus. The chief gladiators were two great legal giants of the century. Like two bull elephants locked in mortal combat, they bellowed and roared imprecations and abuse. The spectators sat uneasily in the sweltering heat with murder in their hearts, barely able to restrain themselves. At stake was the freedom of every American. One of the most moving and meaningful plays of our generation. a tidal wave of a drama. -- New York World-Telegram And Sun