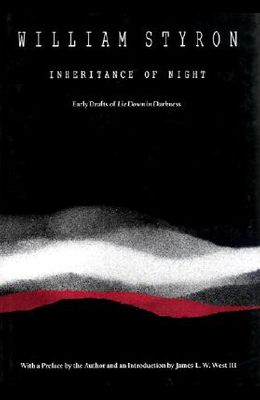 Inheritance of Night: Early Drafts of Lie Down in Darkness

From 1947 to 1949, William Styron twice attempted to write a novel under the working title Inheritance of Night. On the third attempt he produced the award-winning Lie Down in Darkness, which when published in September 1951 established him as one of the most promising writers of his generation. Duke University Press is proud to publish, in facsimile form, the long-lost drafts of Styron's earliest versions of Lie Down in Darkness.Although Styron began the narrative twice, he realized both times that his writing was derivative and his characters not yet fully conceived. These drafts show young Stryon feeling his way into the story with various narrative voices and strategies, and attempting to work out his plot. Influence from William Faulkner, F. Scott Fitzgerald, and Robert Penn Warren is apparent in the text, and there is a character present named Marcus Bonner who is an early rendition of Stingo in Sophie's Choice.The typescript drafts of Inheritance of Night for many years were thought to have been lost, but in 1980 were discovered in the files of one of Styron's former literary agents. These drafts, eventually made their way to the archive of Styron's papers assembled at Duke University Library. This facsimile is published here in two different limited editions for collectors: a lettered, signed, and boxed edition (26 copies) and a numbered, signed edition (250). A general interest trade volume is also available.With a preface by Styron and an introduction by James L. W. West III, these drafts afford much insight into the creation of Lie Down in Darkness and the writing of a major twentieth-century American writer.

From the Back Cover It's fascinating for me to read, for the first time in over forty years, the stumbling starts toward the creation of Lie Down in Darkness. These passages show how, in my early twenties, I may have been in possession of a luminous vision for a novel but how it was a luminosity clouded by much indecision and awkwardness. . . . Inheritance of Night, then, is made up of fragments of a beginning, bits of fruitful inspiration mingled with conceits that were stillborn.--William Styron, from the Preface