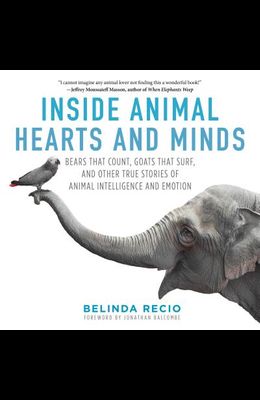 Inside Animal Hearts and Minds: Bears That Count, Goats That Surf, and Other True Stories of Animal Intelligence and Emotion

Extraordinary observations of animals living and behaving with feeling in our world. As Charles Darwin suggested more than a century ago, the differences between animals and humans are of degree and not of kind. Not long ago, ethologists denied that animals had emotions or true intelligence. Now, we know that rats laugh when tickled, magpies mourn as they cover the departed with greenery, female whales travel thousands of miles for annual reunions with their gal pals, seals navigate by the stars, bears hum when happy, and crows slide down snowy rooftops for fun. In engaging text, photographs, and infographics, Inside Animal Hearts and Minds showcases fascinating and heart-warming examples of animal emotion and cognition that will foster wonder and empathy. Learn about an orangutan who does macrame, monkeys that understand the concept of money, and rats that choose friendship over food. Even language, math, and logic are no longer exclusive to humans. Prairie dogs have their own complex vocabularies to describe human intruders, parrots name their chicks, sea lions appear capable of deductive thinking akin to a ten-year-old child's, and bears, lemurs, parrots, and other animals demonstrate numerical cognition. In a world where a growing body of scientific research is closing the gap between the human and non-human, Inside Animal Hearts and Minds invites us to change the way we view animals, the world, and our place in it.

Books similiar to Inside Animal Hearts and Minds: Bears That Count, Goats That Surf, and Other True Stories of Animal Intelligence and Emotion

List of All Editions of Inside Animal Hearts and Minds: Bears That Count, Goats That Surf, and Other True Stories of Animal Intelligence and Emotion