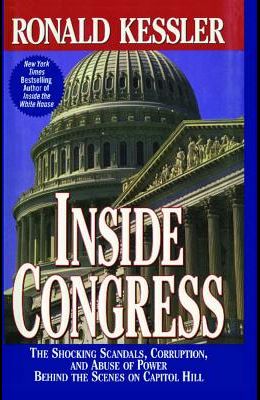 Inside Congress: The Shocking Scandals, Corruption, and Abuse of Po

MONEY, SEX, AND SELF-INTEREST TAKEN CONTROL OF CAPITOL HILL Now more than ever, Congress runs the country. But who is running Congress? New York Times bestselling author and award-winning journalist Ronald Kessler takes you behind the scenes, conducting unprecedented interviews with more than 350 insiders to reveal the shocking answer to that question. Here are the sex scandals, the dirty financial deals, the abuses of power -- the deepest, darkest secrets of Congress -- exposed for the first time, including: How congressional members -- including the entire House Republican leadership -- used taxpayer dollars to lavishly redecorate their offices with custom-made furniture, including $20,000 chairs. Eyewitness accounts of members engaging in adulterous affairs and wild orgies in the parking lots, back rooms, and hidden chambers of Capitol Hill. Evidence of special-interest money-laundering schemes that put millions into the pockets of our elected officials. Meticulously documented and chock-full of sizzling revelations, Inside Congress is making headlines across the country. Read it -- and find out what your senators and representatives don't want you to know.

Books like Inside Congress: The Shocking Scandals, Corruption, and Abuse of Po

List of All Editions of Inside Congress: The Shocking Scandals, Corruption, and Abuse of Po