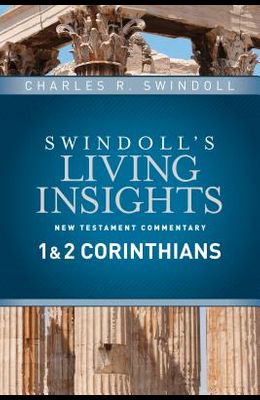 Part of the Insights Series
by
Charles R Swindoll

Corinth, a diverse, cosmopolitan city sitting at a strategic center of commerce for both Greece and the wider Roman Empire, was known for its decadence and wealth. In his commentary on 1 and 2 Corinthians, Chuck Swindoll explores how Paul took the Corinthian church to task for taking on the character of the city instead of the character of Christ. As Chuck shows, the message of Paul to the Corinthians is greatly needed by the Church today. The 15-volume Swindoll's Living Insights New Testament Commentary series draws on Gold Medallion Award-winner Chuck Swindoll's 50 years of experience studying and preaching God's Word. His deep insight, signature easygoing style, and humor bring a warmth and practical accessibility not often found in commentaries. Each volume combines verse-by-verse commentary, charts, maps, photos, key terms, and background articles with practical application. The newly updated volumes now include parallel presentations of the NLT and NASB before each section. This series is a must-have for pastors, teachers, and anyone else who is seeking a deeply practical resource for exploring God's Word.

From the Back Cover Corinth was diverse and powerful--a city of commerce, wealth, moral decadence--and was home to a fledgling church made up of both Jewish and Greek converts. As our own culture and churches begin to look more and more like that of the disheveled, self-serving church in Corinth, Paul's words to them take on greater import and more urgent practicality. In 1 Corinthians Paul focuses on healthy church life. He confronts a growing number of problems dividing the church--the effects of its diverse membership, persecution, and the corrupt religious and moral culture where it ministered--and he calls believers onward in sanctification and the exercise of spiritual gifts. 2 Corinthians is Paul's emotional response to the church's challenges to his authority and teaching. It is a treatise on authentic ministry in all its earthiness and harsh, human realities. This vivid picture of raw but real ministry sheds a stark light on the inferior motives, methods, and messages of false ministers, ending with a plea to return to a path of purity and righteousness.