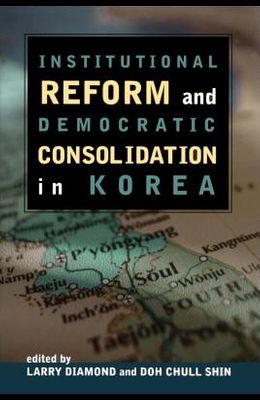 Having undergone a transition from military authoritarian rule in 1987, Korea quickly became the most powerful democracy in East Asia other than Japan. But the onset of a major economic crisis revealed the dark side of the Korean model of democracy. With that crisis and the subsequent election of the country s most determined opposition figure as president serious questions have arisen about the new democracy s vitality. Institutional Reform and Democratic Consolidation in Korea examines the problems and prospects of democracy in Korea a decade after the transition from military authoritarian rule, including the key factors shaping the quality and viability of Korean democracy. The authors evaluate the reform agenda of recent years and explain Why the current electoral system is deficient in producing an effective government How the current system of local government autonomy is in fact just a variation of past authoritarian central control under the guise of democracy Why Korea will remain vulnerable to renewed economic crisis unless it can better address the fundamental structural flaws that hamper its economic competitiveness and the integrity of its financial system What steps have been taken to curtail the power of the deeply entrenched military, bureaucratic, and big business domination Why the National Assembly is neither autonomous nor capable of managing internal conflicts according to the rules of the democratic game How the Korean media moved out from under authoritarian government influence only to become diminished by a new commercialism and sensationalism How a new civic mobilization among the people has deepened democracy and contributed to democratic consolidation in Korea Why the previous government administration failed to prevent the economic crisis despite signs of troubled economic foundations What measures the new government should pursue to resolve the economic crisis and revive this once-prosperous democratic model Institutional Reform and Democratic Consolidation in Korea presents a wide-ranging and balanced account of the political, economic, and cultural factors shaping Korean democracy and of the institutional reforms that are needed to deepen and consolidate this crucial experiment with democracy in East Asia.