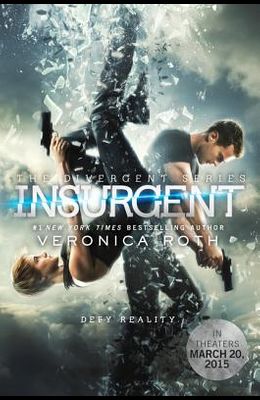 Book #2 in the Divergent Series
by
Veronica Roth

This unique edition of the second book in Veronica Roth's Divergent series features cover artwork from the major motion picture of Insurgent starring Shailene Woodley, Theo James, Ansel Elgort, and Octavia Spencer. One choice can destroy you. Veronica Roth's second #1 New York Times bestseller continues the dystopian thrill ride that began in Divergent . Fans of the Divergent films--young and old--will find just as much adrenaline-inducing action and as many thought-provoking themes in these pages as on the screen. As war surges in the factions of dystopian Chicago, Tris attempts to save those she loves--and herself--while grappling with haunting questions of grief and forgiveness, identity and loyalty, politics and love. And don't miss The Fates Divide , Veronica Roth's powerful sequel to the bestselling Carve the Mark

From the Back Cover One choice can transform you--or it can destroy you. Tris Prior's initiation day should have been marked by celebration, victory, and the thrills of being ranked first among the initiate class of her chosen faction, Dauntless. Instead, the day ends with the unspeakable horrors of Erudite simulation attacks, and while Tris survives thanks to her Divergent nature, many she loves do not. War now seems inevitable. Though the Dauntless have been freed from Erudite mind control, conflict between the factions and their ideologies is only beginning. And in war, sides must be chosen, secrets will emerge, and choices will become even more irrevocable--and even more powerful. Transformed by her own decisions but also by haunting grief, radical new discoveries, and a fast-deepening romance, Tris must fully embrace her Divergence, even if she does not know what she may lose by doing so. New York Times bestselling author Veronica Roth's second book of the dystopian divergent series is another intoxicating thrill ride of a story, rich with her hallmark twists, heartbreaks, romance, and powerful insights about human nature.