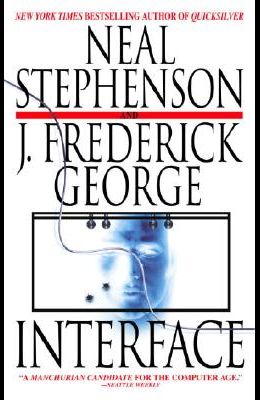 A biochip in presidential candidate William Cozzano's brain hardwires him to a computerized polling system that channels the mood of the electorate directly into his brain.

From the front Cover From his triumphant debut with Snow Crash to the stunning success of his latest novel, Quicksilver, Neal Stephenson has quickly become the voice of a generation. In this now-classic thriller, he and fellow author J. Frederick George tell a shocking tale with an all-too plausible premise. There's no way William A. Cozzano can lose the upcoming presidential election. He's a likable midwestern governor with one insidious advantage--an advantage provided by a shadowy group of backers. A biochip implanted in his head hardwires him to a computerized polling system. The mood of the electorate is channeled directly into his brain. Forget issues. Forget policy. Cozzano is more than the perfect candidate. He's a special effect. Complex, entertaining, frequently funny.--Publishers Weekly Qualifies as the sleeper of the year, the rare kind of science-fiction thriller that evokes genuine laughter while simultaneously keeping the level of suspense cranked to the max.-- San Diego Union-Tribune A Manchurian Candidate for the computer age. --Seattle Weekly