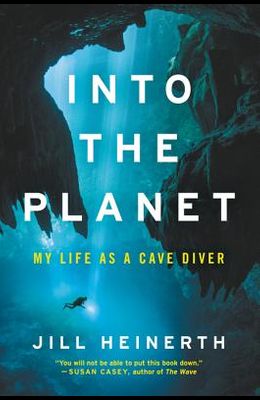 Into the Planet: My Life as a Cave Diver

From one of the world's most renowned cave divers comes a firsthand account of exploring the earth's final frontier: the hidden depths of the oceans and the sunken caves inside the planet.

From the Back Cover From one of the world's most renowned cave divers, a firsthand account of exploring the earth's final frontier More people have died exploring underwater caves than climbing Mount Everest, and we know more about deep space than we do about the depths of our oceans. Into the Planet blends science, adventure, and memoir to bring readers face-to-face with the terror and beauty of earth's remaining unknowns and the extremes of human capability. As one of the most celebrated cave divers in the world, Jill Heinerth has seen the planet in a way almost no one has. In a workday, she might swim below your home, through conduits in volcanoes or cracks in the world's largest iceberg. She's an explorer, a scientist's eyes and hands underwater--discovering new species and examining our finite freshwater reserves--and a filmmaker documenting the wonders of underwater life. Often the lone woman in a male-dominated field, she tests the limits of human endurance at every tight turn, risking her life with each mission. To not only survive in this world but excel, Jill has had to learn how to master fear like no other. Written with hair-raising intensity, Into the Planet is the first book to deliver an intimate account of cave diving, transporting readers deep into inner space, where a mission's success balances between knowing one's limits and pushing the envelope of human endurance.