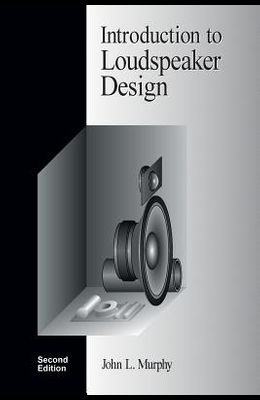 Introduction to Loudspeaker Design is written for students, technicians, engineers and hobbyists seeking an overview of the technology of loudspeakers. Starting with a brief history of audio developments the book begins by introducing the concepts of frequency, pitch and loudness and proceeds to develop the idea of a loudspeaker as a system. The book covers such topics as loudspeaker design tradeoffs, spatial loading, diffraction loss, cavity effect and enclosure construction. A complete chapter is devoted to the subject of crossover design including design equations. The second edition adds a new chapter on simulation and analysis which includes design equations for closed and vented type speakers. The appendices contain technical references, design aids, glossaries and a chart depicting 18 different loudspeaker enclosure types. The author is a physicist/audio design engineer with over 35 years experience in the research and development of audio products spanning both hardware and software. His WinSpeakerz, TrueRTA and DATS software applications are widely used throughout the audio industry as tools for simulating and measuring loudspeaker performance. Captain Murphy served as a space systems analyst for NORAD during his military career. Changes for the Second Edition: The second edition brings new material and polishes the first edition with many new or improved illustrations. Chapter 2 was expanded with the second half split into a new Chapter 3 titled Speaker Response Functions. The discussion of Thiele-Small parameters has been expanded and now covers small-signal parameters vs. large-signal parameters as it explores the role of the test signal level in parameter measurement. The crossover design chapter has been expanded to include formulas for calculating component values for the most popular crossover types. Equations have been added for calculating impedance compensation and attenuation networks. The old Chapter 7 FAQ material was integrated into other chapters as appropriate. A new Chapter 8 titled Loudspeaker Simulation has been added and introduces loudspeaker equivalent circuit analysis with equations for calculating the magnitude and phase responses of closed and vented loudspeaker systems. Additional design equations are introduced and then examples are given for calculating the responses of a closed box and a vented box loudspeaker. Detailed design equation summaries are given for closed and vented boxes. Appendix C was added to provide a glossary of symbols and a glossary of terms. The box type charts were moved to Appendix D.

List of All Editions of Introduction to Loudspeaker Design: Second Edition