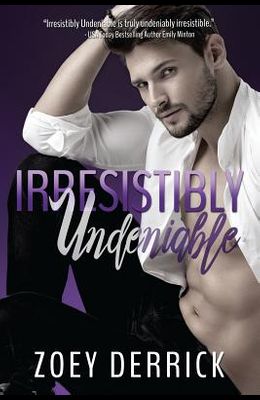 From Best Selling Author, Zoey Derrick, comes a brand new standalone novel about getting a second chance. Irresistibly Undeniable is truly undeniably irresistible. USA Today Bestselling Author, Emily Minton She was his best friend's chubby sister. He was the star football player. It never made sense that he would want her, but he did. It's been ten years since Dyson Cole walked out of the barn after taking Ireland McKidd's innocence with him. Another notch in his belt. Then he was gone. Ireland has lost everything she's ever cared about. She's trying to pick up the pieces of her shattered heart, when the last person to obliterate it barges back into her life - literally. Dyson has everything - money, power, sex appeal - a real life Adonis and women line up outside his door. But he'd gladly give up his whorish ways for the one woman he walked away from. She's wrecked, broken, a shell of the girl he once knew. He's incapable of ignoring what she means to him. She's irresistible. He's undeniable.