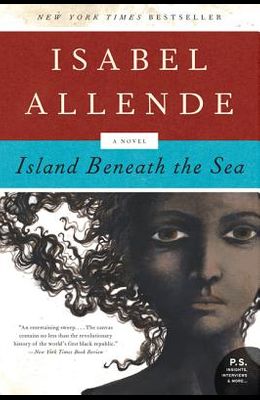 Island Beneath the Sea

Spanning four decades, Island Beneath the Sea is the moving story of the intertwined lives of Zarit and Valmorain, and of one woman's determination to find love amid loss, to offer humanity though her own has been battered, and to forge her own identity in the cruelest of circumstances.

From the Back Cover Born a slave on the island of Saint-Domingue--the daughter of an African mother she never knew and a white sailor who brought her into bondage--Zarité, known as Tété, survives a childhood of brutality and fear, finding solace in the traditional rhythms of African drums and in her exhilarating initiation into the mysteries of voodoo. When twenty-year-old Toulouse Valmorain arrives on the island in 1770, he discovers that running his father's plantation is neither glamorous nor easy. Marriage also proves problematic when, eight years later, he brings home a bride. But it is his teenaged slave, Tété, upon whom Valmorain becomes most dependent, as their lives intertwine across four tumultuous decades. In Island Beneath the Sea , internationally acclaimed author Isabel Allende spins the unforgettable saga of an extraordinary woman determined to find love amid loss and forge her own identity under the cruelest of circumstances.