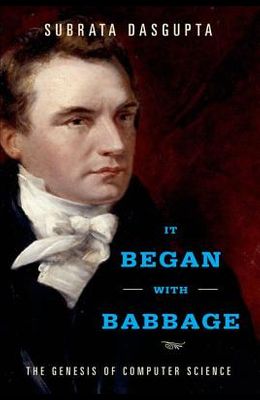 It Began with Babbage: The Genesis of Computer Science

As a field, computer science occupies a unique scientific space, in that its subject matter can exist in both physical and abstract realms. An artifact such as software is both tangible and not, and must be classified as something in between, or liminal. The study and production of liminal artifacts allows for creative possibilities that are, and have been, possible only in computer science. In It Began with Babbage , computer scientist and writer Subrata Dasgupta examines the distinct history of computer science in terms of its creative innovations, reaching back to Charles Babbage in 1819. Since all artifacts of computer science are conceived with a use in mind, the computer scientist is not concerned with the natural laws that govern disciplines like physics or chemistry; instead, the field is more concerned with the concept of purpose. This requirement lends itself to a type of creative thinking that, as Dasgupta shows us, has exhibited itself throughout the history of computer science. More than any other, computer science is the science of the artificial, and has a unique history to accompany its unique focus. The book traces a path from Babbage's Difference Engine in the early 19th century to the end of the 1960s by when a new academic discipline named computer science had come into being. Along the way we meet characters like Babbage and Ada Lovelace, Turing and von Neumann, Shannon and Chomsky, and a host of other people from a variety of backgrounds who collectively created this new science of the artificial. And in the end, we see how and why computer science acquired a nature and history all of its own.