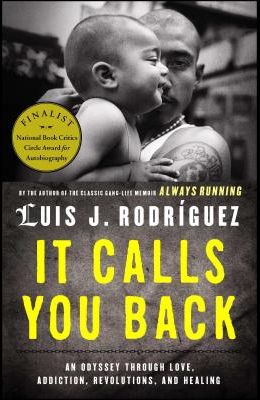 It Calls You Back: An Odyssey Through Love, Addiction, Revolutions, and Healing

Luis Rodriguez, author of the award-winning and bestselling classic memoir Always Running, chronicles his harrowing journey from a drugged-out gang member to one of the most revered figures in Chicano literature. Hundreds of thousands of readers came to know Luis J. Rodriguez through his fearless classic, Always Running, which chronicled his early life as a young Chicano gang member surviving the dangerous streets of East Los Angeles. The long-awaited follow-up, It Calls You Back is the equally harrowing story of Rodriguez starting over, at age eighteen, after leaving gang life the only life he really knew. The book opens with Rodriguez s final stint in jail as a teenager and follows his struggle to kick heroin, renounce his former life, and search for meaningful work. He describes with heartbreaking honesty his challenges as a father, and his difficulty leaving his rages and addictions completely behind. Even as he breaks with la vida loca and begins to discover success as a writer and an activist, Rodriguez finds that his past the crimes, the drugs, the things he d seen and done has a way of calling him back. When his oldest son is sent to prison for attempted murder, Rodriguez is forced to confront his shortcomings as a father, and to acknowledge how and why his own history is repeating itself, right before his eyes. Deeply insightful and beautifully written, It Calls You Back is an odyssey through love, addiction, revolutions, and healing.

Books similiar to It Calls You Back: An Odyssey Through Love, Addiction, Revolutions, and Healing

List of All Editions of It Calls You Back: An Odyssey Through Love, Addiction, Revolutions, and Healing