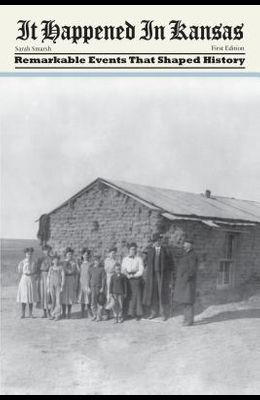 Part of the It Happened In... Series
by
Sarah Smarsh
$14.95
Select Format

It Happened in Kansas will feature over 25 chapters in Kansas history. Lively and entertaining, this book will bring the varied and fascinating history of the Sunflower State to life.

From the Back Cover True Tales from the Sunflower State's Past--from the fossils of Twelve Mile Creek to the Flying Spaghetti Monster A land of political paradoxes as extreme as those of its weather, Kansas is a state that both helped win women the right to vote and first banned alcohol. It Happened in Kansas goes behind the scenes to tell its story, in short episodes that reveal the intriguing people and events that have shaped the Sunflower State. Learn how the destruction of Lawrence, an abolitionist stronghold, on May 21, 1856, fed John Brown's thirst for revenge. Remember Amelia Mary Earhart, the adventurous child who grew up to make her hometown of Atchison, Kansas, proud. Follow the exploits of charlatan John R. Brinkley, the Goat-Gland Doctor who went from preying on rural communities to taking America and the world by storm.

It Happened In... Series In Order - By Sarah Smarsh

List of All Editions of It Happened in Kansas: Remarkable Events That Shaped History, First Edition