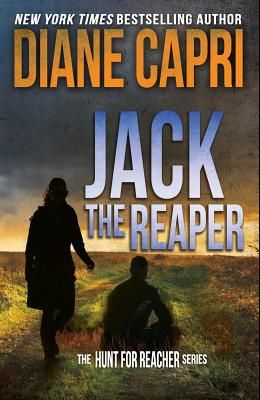 Book #5 in the Hunt for Reacher Series
by
Diane Capri

Intricate and Ingenious. Make some coffee. You'll read all night. Lee Child, #1 World-Wide Bestselling Author of Jack Reacher Thrillers FBI Agents Otto and Gaspar pick up with where Lee Child's The Hard Way leaves off in Diane Capri's latest thriller in The Hunt for Jack Reacher Series. After Jack Reacher handled things The Hard Way in Lee Child's tenth Jack Reacher novel, FBI Special Agents Kim Otto and Carlos Gaspar are dispatched to find out whether Reacher is dead or alive. But they aren't the only ones who want to find Reacher this time. A corrupt Army General is on the hunt, too, determined to make sure Reacher reaps what he sowed. Reacher's friends Brewer and Lauren Pauling are in the crosshairs. When powerful enemies with their backs against the wall will stop at nothing to make Reacher pay, can Otto and Gaspar find the secrets Reacher left behind to keep his friends alive? Lee Child Gives Diane Capri's Hunt for Jack Reacher Series Two Thumbs Up Full of thrills and tension, but smart and human, too. Kim Otto is a great, great character - I love her. Lee Child, #1 World Wide Bestselling Author of Jack Reacher Thrillers NEW from award-winning New York Times and USA Today Bestselling Author Diane Capri The Hunt for Jack Reacher series enthralls fans of John Grisham, Lee Child, and more: Diane writes like the maestro of the jigsaw puzzle. Sit back in your favorite easy chair, pour a glass of crisp white wine, and enter her devilishly clever world. -David Hagberg, New York Times Bestselling Author of Kirk McGarvey Thrillers Expertise shines on every page. -Margaret Maron, Edgar, Anthony, Agatha and Macavity Award Winning MWA Past President and MWA Grand Master 2013 Readers Love the Hunt for Jack Reacher Series and Diane Capri: I 'stumbled' on this title and was attracted to it as I am a Jack Reacher fan. Loved the story and the author's writing style. Couldn't wait for more so I purchased Raw Justice] and want more Jennifer Lane - please? Fatal Distraction is also on my Kindle to read list I have been a Reacher fan for years and was excited when I heard of Diane Capri's take on 'Finding Reacher'. 'Don't Know Jack' is a good companion to Child's Reacher books and recaptures the flavor of the Reacher mystique. I am waiting anxiously for the next book in the series and the next and the next, and so on. All Child fans should give it a try Award winning New York Times and USA Today Bestselling Author DIANE CAPRI Does It Again in another blockbuster Hunt for Jack Reacher Series Novel

Hunt for Reacher Series In Order - By Diane Capri