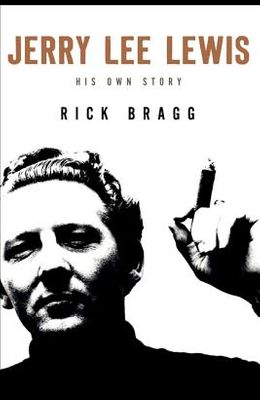 Jerry Lee Lewis: His Own Story

New York Times Bestseller The greatest Southern storyteller of our time, New York Times bestselling author Rick Bragg, tracks down the greatest rock and roller of all time, Jerry Lee Lewis--and gets his own story, from the source, for the very first time. A monumental figure on the American landscape, Jerry Lee Lewis spent his childhood raising hell in Ferriday, Louisiana, and Natchez, Mississippi; galvanized the world with hit records like Whole Lotta Shakin' Goin' On and Great Balls of Fire, that gave rock and roll its devil's edge; caused riots and boycotts with his incendiary performances; nearly scuttled his career by marrying his thirteen-year-old second cousin--his third wife of seven; ran a decades-long marathon of drugs, drinking, and women; nearly met his maker, twice; suffered the deaths of two sons and two wives, and the indignity of an IRS raid that left him with nothing but the broken-down piano he started with; performed with everyone from Elvis Presley to Keith Richards to Bruce Springsteen to Kid Rock--and survived it all to be hailed as one of the most creative and important figures in American popular culture and a paradigm of the Southern experience. Jerry Lee Lewis: His Own Story is the Killer's life as he lived it, and as he shared it over two years with our greatest bard of Southern life: Rick Bragg. Rich with Lewis's own words, framed by Bragg's richly atmospheric narrative, this is the last great untold rock-and-roll story, come to life on the page.

From the Back Cover For nearly sixty years, Jerry Lee Lewis has been a monumental figure in American life. The wildest and most dangerous of the early rock and rollers, he electrified the world with hit records such as Whole Lotta Shakin' Goin' On, Great Balls of Fire, and Breathless. His music was raucous, exuberant, slyly sexual; his wailing vocals were grounded by the locomotive force of his pumping piano. But his persona and performing style were what changed the world: whipping his long hair back, he would pound the keyboard like a coal-fired steam engine, then kick back the bench, climb atop the piano, and work the audience like the Pentecostal preacher he almost became. Poised to steal the crown from Elvis Presley, he seemed unstoppable--until news of his marriage to his thirteen-year-old cousin broke during his first British tour, nearly ending his career. Now, for the first time, Lewis's story is told in full, as he shared it over two years with Pulitzer Prize-winning writer Rick Bragg. In a narrative rich with atmosphere and anecdote, we watch Jerry Lee emerge from the fields and levees of Depression-era Louisiana, blazing a path across Bible colleges and nightclubs en route to international fame. He shared bills with Johnny Cash and Chuck Berry, toured Australia with Buddy Holly and Paul Anka, and went Cadillac for Cadillac with Elvis on the streets of Memphis--even as both of them struggled with the conflict between their faith and their music. After a decade in the wilderness, he returned as the biggest star in country music, but his victory lap became a marathon of excess, a time of guns and pills and Calvert Extra. He crashed Rolls-Royces and Lincolns, including one he drove into the gates of Graceland; suffered the deaths of wives and loved ones; and nearly met his maker twice himself. Yet after six marriages, a long spell without a recording contract, and a bruising battle with the IRS, he overcame a crippling addiction, remarried, and scored his biggest hit records since the 1970s. Today, as he approaches his eightieth year, he continues to electrify audiences around the world. The story of Jerry Lee Lewis has inspired songs and articles, books and films, but in these pages Rick Bragg restores a human complexity missing from other accounts. The result is a story of fire and faith and resilience, informed by Rick Bragg's deep understanding of the American spirit, and rich with Jerry Lee's own unforgettable voice.

Frequently Asked Questions About Jerry Lee Lewis: His Own Story

0
|   0  reviews
Did you read Jerry Lee Lewis: His Own Story? Please provide your feedback and rating to help other readers.
Write Review

List of All Editions of Jerry Lee Lewis: His Own Story