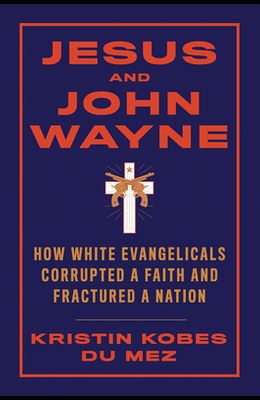 Jesus and John Wayne: How White Evangelicals Corrupted a Faith and Fractured a Nation

How did a libertine who lacks even the most basic knowledge of the Christian faith win 81 percent of the white evangelical vote in 2016? And why have white evangelicals become a presidential reprobate's staunchest supporters? These are among the questions acclaimed historian Kristin Kobes Du Mez asks in Jesus and John Wayne, which delves beyond facile headlines to explain how white evangelicals have brought us to our fractured political moment. Challenging the commonly held assumption that the moral majority backed Donald Trump for purely pragmatic reasons, Du Mez reveals that Donald Trump in fact represents the fulfillment, rather than the betrayal, of white evangelicals' most deeply held values. Jesus and John Wayne is a sweeping account of the last seventy-five years of white evangelicalism, showing how American evangelicals have worked for decades to replace the Jesus of the Gospels with an idol of rugged masculinity and Christian nationalism, or in the words of one modern chaplain, with a spiritual badass. As Du Mez explains, the key to understanding this transformation is to recognize the role of culture in modern American evangelicalism. Many of today's evangelicals may not be theologically astute, but they know their VeggieTales, they've read John Eldredge's Wild at Heart , and they learned about purity before they learned about sex--and they have a silver ring to prove it. Evangelical books, films, music, clothing, and merchandise shape the beliefs of millions. And evangelical popular culture is teeming with muscular heroes--mythical warriors and rugged soldiers, men like Oliver North, Ronald Reagan, Mel Gibson, and the Duck Dynasty clan, who assert white masculine power in defense of Christian America. Chief among these evangelical legends is John Wayne, an icon of a lost time when men were uncowed by political correctness, unafraid to tell it like it was, and did what needed to be done. Trump, in other words, is hardly the first flashy celebrity to capture evangelicals' hearts and minds, nor is he the first strongman to promise evangelicals protection and power. Indeed, the values and viewpoints at the heart of white evangelicalism today--patriarchy, authoritarian rule, aggressive foreign policy, fear of Islam, ambivalence toward #MeToo, and opposition to Black Lives Matter and the LGBTQ community--are likely to persist long after Trump leaves office. A much-needed reexamination, Jesus and John Wayne explains why evangelicals have rallied behind the least-Christian president in American history and how they have transformed their faith in the process, with enduring consequences for all of us.

From the Back Cover [Du Mez's] astonishing gifting was in the way she took 1000 puzzle pieces and fit them together. I don't swallow books whole but the evidence for much of what she's written is staring us in the face. --Beth Moore Paradigm-influencing. . . A very readable page-turner. --Scot McKnight, Christianity Today Jesus and John Wayne is a tour-de-force indictment of the white evangelical cult of masculinity. --Michael Rea, Salon [N]ot only one of the most important books on religion and the 2016 elections but one of the most important books on post-1945 American evangelicalism published in the past four decades. --Jon Butler, Church History I hear people say all the time that Trump's election was a tragedy for evangelicals, but after reading [this] book, I wonder if it isn't their greatest victory. --Sean Illing, Vox Brilliant and engaging . . . Across chapters ranging from 'John Wayne Will Save Your Ass' to 'Holy Balls, ' Du Mez peppers her text with entertaining (and sometimes horrifying) examples. --Matthew Avery Sutton, The New Republic It is impossible to do justice to the richness of Jesus and John Wayne in a short review, but one of the key points the book stresses is that as Christian nationalists, the vast majority of white evangelicals believe that our country's flourishing depends on aggressive male leadership. The pervasive abusive patterns of white evangelical subculture replicate themselves on a large social scale in the Christian Right's politics. Since understanding this will be crucial if Americans are to have a functional democratic future, Jesus and John Wayne is a book that America needs now. --Chrissy Stroop, Boston Globe A much needed and painstakingly accurate chronicle of exactly 'where many evangelicals are, ' and the long road that got them there. --Tom Cox, Pittsburgh Post-Gazette [A] book that's ignited an enormous amount of argument and debate across the length and breadth of the Christian intelligentsia . . . Du Mez meticulously documents how--time and again--Christian institutions have indulged and often valorized aggressive hyper-masculine male leaders who proved to be corrupt, exploitive, and abusive. They weren't protectors. They were predators. --David French, The Dispatch [An] absolute must-read, a stunning work, and one that deserves serious attention and further conversation. --Joel Wentz, Englewood Review of Books Jesus and John Wayne should be required reading for those who live and move and have our being within American evangelical denominations and churches. --Sean Michael Lucas, Mere Orthodoxy Jesus and John Wayne is history as confession, history as lament, a type of history that hopes in a God who never puts us to shame, even as hope in America does. --Aarik Danielsen, Christ & Pop Culture Du Mez makes it clear that she's not criticizing from the ivory tower or explicitly from the left. A history professor at a prominent Christian college, the author of A New Gospel for Women , and a contributor to Christianity Today , she's in an ideal position to expose the hypocrisy, crudeness, and chauvinism of the religious right. --Matt Hanson, The Baffler [A] fascinating and fervent book . . . a provocative, but insightful and detailed look at the culture and impact of evangelical Christianity today, where The Duke and The Messiah are riding saddle-by-saddle toward some sort of glory. --Bob Ruggiero, Houston Press In her smart, deftly argued book, historian Du Mez delves into white evangelicals' militantly patriarchal expressions of faith and their unwavering support for libertine President Donald Trump. Du Mez, a professor at Calvin University, clearly explicates the way the evangelical cult of masculinity has played out over decades. -- The National Book Review

Frequently Asked Questions About Jesus and John Wayne: How White Evangelicals Corrupted a Faith and Fractured a Nation

Books like Jesus and John Wayne: How White Evangelicals Corrupted a Faith and Fractured a Nation

List of All Editions of Jesus and John Wayne: How White Evangelicals Corrupted a Faith and Fractured a Nation